We love the cosplay and gaming elements of our event this year, and are happy to welcome Jason Rawley of Fireblade Comics to our line up for Gulf Coast MakerCon 2014.  We asked him to tell us a bit about his work and what he’s bringing to our maker event.

GCMC: What do you do?

JR: Fireblade Comics began as my dream of producing online, live-action, interactive comics. As it’s developed over the years, I also incorporated my other works with custom action figures, props, and other collectibles.

JR: I grew up in the 80’s as a huge fan of comics and movies and I was drawn to the realm of film making at an early age, especially special effects. Even as early as elementary school I 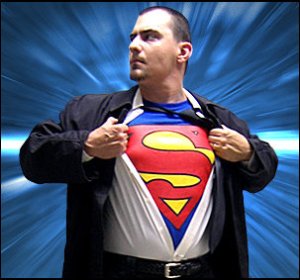 would create props and set pieces for the school plays. Art has always been in my veins so over the years I’ve done everything from graphic arts, website design, drawing, writing, and crafting. I’ve been building scale models for many years so that led to customizing action figures. Prop making became more of a demand as the cosplay community has grown, to the point where I get quite a few commissions throughout the year from people who come across my other works.

GCMC: Why do you think it’s important or valuable?

JR: I believe all art is important as self expression while is essential to us as humans. For those who get into cosplaying or collecting, this can be a great escape from the stress of normal life. So it’s always a privilege for me to be able to use my art to express myself while at the same time creating things people will use and appreciate for years.

GCMC: How long have you been doing it?

JR: I’ve been crafting, building, and customizing since early childhood so most people would say it was “all my life”.

JR: As a form of self expression, being able to create things from my imagination is a wonderful release and a therapy. It’s taken me places and I’ve gotten to make many great friends over the years.

GCMC: What are you bringing for folks to see or do at Gulf Coast MakerCon?

JR: I’ll be bringing a healthy selection of my customs including an array of props from sci-fi blasters to Ghostbuster gear as well as some action figure bases and displays. If possible I’ll bring some work-in-progress pieces so I can demonstrate how projects move through the construction phases.

GCMC: What do you hope to get out of your Makercon experience?

JR: I’m hoping to meet some good people with the same interests and fanboy fascinations as myself as well as get some feedback on my projects.