He was Making before Making was cool! Anyone who’s been involved in the inventors community in Tampa Bay for any length of time knows Wayne Rasanen, long time leader of the Tampa Bay Inventors Council, but first and foremost, an inventor himself, creator of DecaTxt.

Wayne’s been an ardent supporter of Gulf Coast MakerCon from its earliest days as a Mini Maker Faire, and filmed our great promo video at last year’s event.   Wayne is a gentleman and a scholar, a friend of inventors, and a valued partner that we feel honored to have with us again for this year’s Gulf Coast MakerCon. He tells us more about himself here, and what you can look for at Gulf Coast MakerCon 2015.

GCMC: Who are and what do you make?

WR: My Name is Wayne Rasanen and I’m making a new kind of mobile keyboard for touch-typing called DecaTxt

GCMC: Why do you make it? 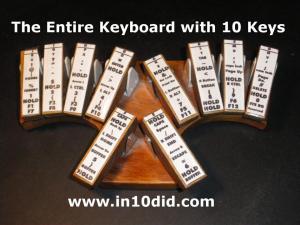 on tiny touch-screens.We need something designed for modern small devices and the DecaTxt is the first step in that direction because you can type without looking with one hand.

GCMC: Why do you think it’s important?

WR:  We see it as an important tool for improving accessibility for the vision impaired and a great variety of other disabilities. It can be used to more safely text because you don’t need to stare at your device to type.

GCMC: What are you bringing to Gulf Coast MakerCon?

WR: We will bring a few of our keyboards so people can learn how a device the size of a deck of cards with only 10 keys can replace a full keyboard. We’ll show some other ways it can be used and even bring a game where stuff blows up!

GCMC: Will folks be able to do anything at your booth?

WR: Try it for yourself and see how 145 years of QWERTY could be at an end… at least in a mobile environment.

GCMC: Why should folks come out to a maker festival?

WR: Last year was a blast and you can see so many things, learn so much, play, build, and experiment with cool projects that you won’t find anywhere else. The line-up this year looks even better!

WR: Those that can, do. Those that can’t, teach. This is a place where the doers and the teachers get together and build stuff that can change the world. Leaders create and make the future so get off your butt and do it. In old age you won’t regret the things you have done as much as you will the things you neglected to do. Use your mind and build!

If that’s not a call to creative action, nothing is! Join Wayne and all our great Makers at Gulf Coast MakerCon, who are using their minds and building our future, and learn how you can, too!