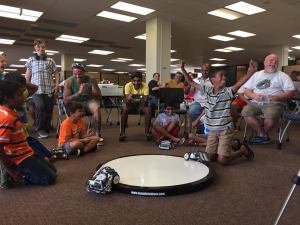 We’ll have a variety of robots and autonomous machines on display and operating at Gulf Coast Maker & Comic Con, and some interactive opportunities, too, like Sumo BrickBots!

Sumo BrickBots is an outreach activity of the Porygon Programmers, a FIRST LEGO League team coached by Eric Brosch with mentor Bill McCoin. This spring, the team is headed to FIRST LEGO League state competition in St. Augustine and an international competition at the University of Arkansas. In the fall, they will participate in FIRST Tech Challenge.  Eric tells us more about Sumo BrickBots here.

Sumo BrickBots brings the fun and learning of LEGO robotics to Tampa Bay by hosting sumo robot workshops and competitions. Using LEGO Mindstorms for this STEM activity, kids design, build, and program their own robot and then test it in friendly competition where the goal is to push the opposing robot out of the ring.

Sumo is a great way for kids ages 9 and up to get started with LEGO robotics or to try advanced building and programming skills. Kids who don’t have their own Mindstorms EV3 or NXT can borrow one at free events hosted by Sumo BrickBots at the John F. Germany Library in downtown Tampa. Events are planned for June 2, June 30, and July 21. Sumo BrickBots also offers camps and corporate team-building events as a fundraiser.

You can try your hand at Sumo Brickbots at Gulf Coast Maker & Comic Con 2018 on March 24, at the St. Petersburg College Seminole Campus!

Get your FREE tickets today!